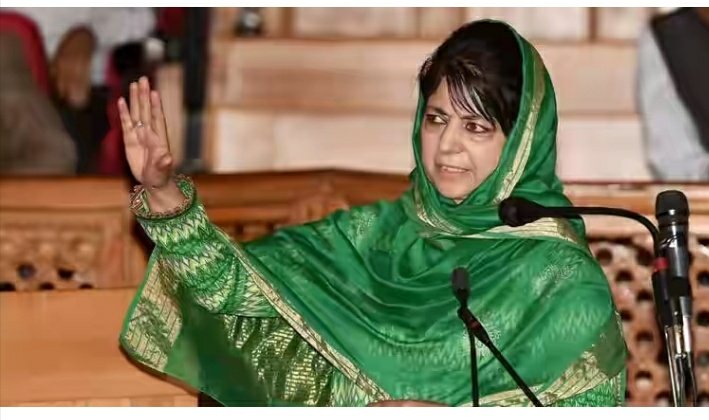 
Jammu March 8 Chief Minister, Mehbooba Mufti, has turned down the demand of alliance partner BJP to handover the investigation of rape and murder of 8-year-old Gujjar girl Asifa to the CBI. “Crime Branch is investigating the case of Asifa. There might be some lapses in Crime Branch probe due to which people of Hiranagar have been demanding CBI probe. We raised the issue with the Chief Minister Mehbooba Mufti today and demanded that investigation should be handed over to CBI. But she declined to hand over the case,” said Health Minister, Bali Bhagat, while speaking to media persons at BJP office in Jammu.

Bhagat was accompanied by the Minister of State (MoS) Ajay Nanda and other leaders and said that BJP Ministers pressed on the CM to go for CBI probe. “But our demand was not accepted.” “The CM responded to our demand by stating that Crime Branch has completed 95 percent of investigation in the case and within a day or two it will present status report before the Jammu Kashmir High Court. The law will take its own course. Whosoever is the accused person should be punished,” he added. Meanwhile, it was reliably learnt, that the Crime Branch which is investigating Asifa’s case will submit status report before the Jammu and Kashmir High Court on March 9.

On the issue, BJP Ministers held a meeting with Mehbooba this afternoon at Civil Secretariat but she declined to hand over the case to CBI. Before their meeting with the CM, BJP leaders held a meeting of party Ministers and discussed issues including CBI probe in Asifa case, allegations of lack of “action against forest encroachers.” Bhagat said that they had gone to meet the CM and raised three main issues including “agitation of people in Nowshera-Sunderbani-Kalakote sector seeking creation of ADC post in the sub division.”

“Earlier our three Ministers led by BJP state president Sat Sharma had gone to Sunderbani-Nowshera to meet the people and listen to their grievances. They demanded ADC posts for the sub-division,” he said. “I want to make it clear it that J&K government is against any type of encroachment and grabbers will have to face law,” asserted Bhagat. He said that the issue which raised yesterday by an advocate was not discussed in the review meeting of Tribal Affairs department which was chaired by Mehbooba Mufti. “We have brought this issue before the Chief Minister who said that this was not discussed. This was not the administrative order.

They were merely minutes of meeting,” said Bhagat, adding that Tribal Affairs department had made “additions to the minutes of the meeting.” “It was decided by the government to formulate a tribal policy for which a Cabinet Sub Committee headed by Deputy Chief Minister, Nirmal Singh, was constituted with other members. The subcommittee will make the recommendation to the government which will be discussed by both the coalition partners in the cabinet meeting,” he added. RK