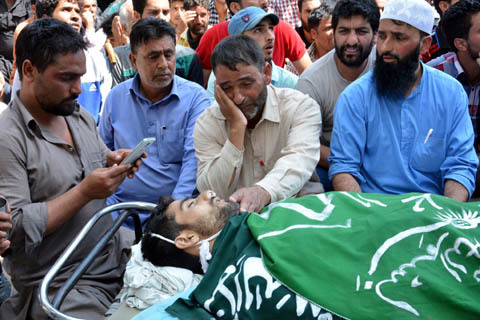 He claimed that forces left people with no choice but to come on roads and then opened fire on them.
Kashmiris forced to come on roads: NC on Seer Hamdan killingPhoto: Mir Wasim/GK

National Conference on Tuesday expressed outrage over the “continued excesses” by forces and the “criminal silence” maintained by Mehbooba Mufti-led government over the atrocities.

Condemning the killing of 20-year-old Naseer Ahmad Dar of Seer Hamadan, National Conference Provincial President Nasir Aslam Wani said: “Such killings have become a norm. People are being forced to come on roads. In Seer, something similar happened,” he said.

He claimed that forces left people with no choice but to come on roads and then opened fire on them.

In a statement issued to KNS, Nasir said, “These nightly raids meant to terrorize people resulted in killing of many youth including the killing that took place today.”

He stressed that it was time for the government to put its ‘act together.

“Mehbooba must ensure that night raids stop. Those responsible for allowing and carrying out these brutalities and murders must be held accountable,” he demanded.

MLA Pahalgam Altaf Ahmad Kaloo also called for an inquiry into the killing. “If at all government has any shame, it must immediately accept responsibility for Naseer’s death. The haughtiness of the current regime is evident when CM tries to blame the killed for their own death,” Kaloo said.

“What happened in Seer, Qazigund, Khrew and scores of other places is testimony to this fact that government is actively shielding those who have been involved in committing excesses on people in the name of maintaining law and order.”

Demanding a judicial probe into Naseer’s killing MLA Pahalgam said, “Has it been ordained on Mehbooba Mufti that she ensures terror on the streets of Kashmir. Is she enjoying this death dance with her coalition partner?” adding, “This killing is the height of misfortune of Kashmir. Even women have not been spared.”

National Conference expressed anguish over the “failure” of the government to put a halt to the spree of killings. (KNS)