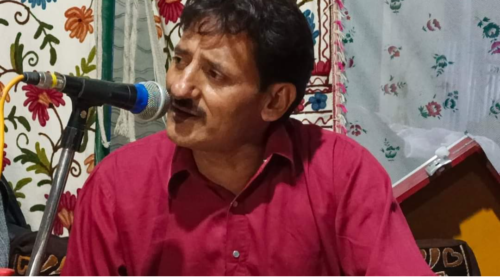 Manzoor shah is a renowned Kashmiri folk singer, famous for his melodious hits ‘Pout Nazar’ among many more and is A plus category singer at Radio Kashmir.

His songs are synonymous with weddings in Kashmir. The singer carries a huge reputation in Kashmir music industry and took it to new heights during his time. His musical innovations in Ghazal and giving a Kashmiri touch to many famous tunes have had a huge hand in developing and modernizing Kashmiri folk music.

His journey into music began at an early age. But his father was a school headmaster and disapproved of music, wishing him to follow his lead. It was however from his mother’s family that Manzoor Shah got his musical taste. Their family used to have a few singers who used to play various instruments. When he saw all this on his visits to his mother’s house, he decided that he wanted to be a folk singer.

During his early years, he got his first major break. Las Koul, director at Radio Kashmir, invited Manzoor and many other to participate in a musical program at a college. Such was Manzoor Shah’s impact that he was selected without audition to sing for Akash Vani. He went through various categories, staring with B class and then reaching A grade to perform for primary channel for Radio Kashmir.

This began his journey to musical summit. He began singing Ghazals brining a unique Kashmiri touch to the genre. He also made various tunes based on the old poetry and songs. His songs proved to be a massive hit among the masses. One after another became an avid listener. And before long Manzoor Shah was a household name.

He credits his teacher Ali Muhammad, who was a principal at a Handwara school for helping him in his career. But his thankful for the love people have shown him, saying there would be no Manzoor Shah without them.

The biggest influence in his songs is the Kashmiri poetry. He acknowledges the impact it had on his singing and composing songs. The need to understand poetry deeply and the poet’s perspective is important before working on the song according to him. Today Kashmiri artists have taken folk music to another level, but Manzoor Shah urges them to promote not only Kashmiri language in their songs but also other aspects of culture such as musical instruments that are traditional with Kashmiri music.