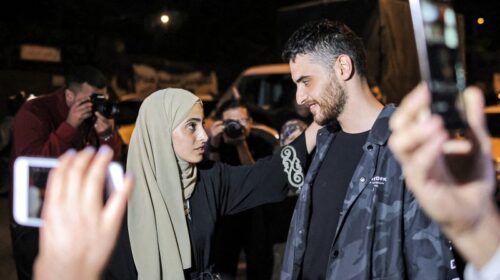 Palestinian rights activists Muna and Mohammed El-Kurd, twins aged 23 have been named in TIME magazine’s annual list of the 100 most-influential people in the world.

Their family faces forced displacement from their home in the occupied East Jerusalem neighbourhood of Sheikh Jarrah.

The El-Kurd twins earlier this year became the faces of a global campaign to halt Israeli efforts to forcibly displace Palestinians from Sheikh Jarrah to make way for Jewish settlers.

Israeli forces detained and questioned the siblings for several hours over their activism in June.

“Through online posts and media appearances, sibling activists Mohammed and Muna El-Kurd provided the world with a window into living under occupation in East Jerusalem this spring – helping to prompt an international shift in rhetoric in regard to Israel and Palestine,” the magazine wrote about the siblings.

TIME Editor-in-Chief Edward Felsenthal said the top-100 list features “extraordinary leaders from around the world working to build a better future” who “in a year of crisis have leaped into the fray”.

Baradar’s profile for Time’s list, written by veteran journalist Ahmed Rashid, noted that he “is revered” among the Afghan Taliban as a founding member, “a charismatic military leader and a deeply pious figure”.

It said that when the Taliban took over the Afghan capital in August, it was on the terms negotiated by Baradar, which included amnesties offered, the lack of bloodshed upon seizing power and contacts and visits with neighbouring states such as Pakistan and China.

“A quiet, secretive man who rarely gives public statements or interviews, Baradar nonetheless represents a more moderate current within the Taliban, the one that will be thrust into the limelight to win Western support and desperately needed financial aid. The question is whether the man who coaxed the Americans out of Afghanistan can sway his own movement,” the profile said

Baradar was once a close friend of the movement’s reclusive first leader, Mullah Mohammad Omar, who gave him his nom de guerre, “Baradar” or “brother”.

The UK’s Prince Harry and Meghan Markle have also made the list, under the section devoted to “icons” alongside popstar Britney Spears and countrysinger Dolly Parton.