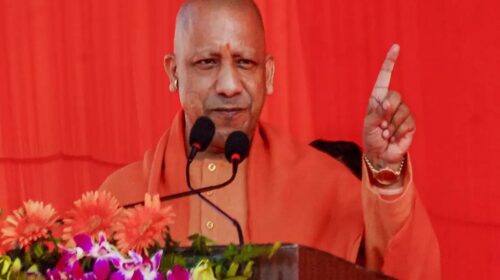 The Rajput bodies have warned of a nation wide agitation against BJP over UP Chief Minister Yogi Adityanath’s proposed visit to Dadri to unveil a statue of north India’s 9th century ruler Mihir Bhoj.

CM Yogi Adityanath is scheduled to visit Dadri on September 22 to unveil the statue Mihir Bhoj, whom the local BJP MLA claimed to be the ancestor of Gurjars.

Tejpal Nagar, the BJP legislator from Dadri, in a statement said, “The CM is reaching Dadri to inaugurate a grand statue of Gurjar Samrat Mihir Bhoj.”

The Rajput bodies termed it as appeasement politics, claiming that Mihir Bhoj belonged to the Kshatriya Rajput community and he was not a Gurjar.

“We have heard that the CM of Uttar Pradesh is going to inaugurate a statue of Samrat Mihir Bhoj. We do not have any problem with that, but if Mihir Bhoj is being associated with Gurjars, then it is an attempt to distort and steal our history and we request the CM to stay away from such malpractices to woo certain votes,” said Mahendra Singh Tanwar, the national president of Akhil Bhartiya Kshatriya Mahasabha.

“Earlier such attempts have been made in Haryana, Madhya Pradesh and Uttarakhand to discredit Rajputs from their ancestry. Samrat Mihir Bhoj was a Kshatryia Rajput. We are over two crore strong voters in Uttar Pradesh and have been a traditional voter of BJP, but such attempts won’t be taken positively in the poll-bound state,” said Tanwar.

Rakesh Singh Raghuvanshi, the state president of the Shri Rashtriya Rajput Karni Sena, said, “Samrat Mihir Bhoj was known as Gurjar-Pratihar Samrat. His caste was Pratihar, which is a Rajput clan, and Gurjar was the name of the area where the current state of Gujrat is and it has nothing to do with any other caste. We want CM Yogi to be re-elected, but he shall stay away from such vicious propaganda. Else we will stage a protest. Nothing is above our legacy and the government must understand this and not lose the traditional Rajput votes.”

Meanwhile, historians also claim that they have not found any proof of Mihir Bhoj being ancestors of any non-Rajput caste.

Dr Bhagwan Singh, a former officer of the Archaeological Survey of India (ASI) and an ancient India historian, said, “Mihir Bhoj was a Pratihar Rajput and his direct descendants are Parihar and other such Rajput castes of central and north India. He was notorious among invaders for his fierce warfare and massive army. The ancient scriptures of the Arab invaders mention his valour on the battlefield as he repeatedly fended off their attempts to invade India.