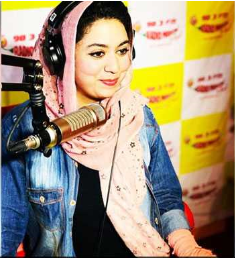 When Rafia Rahim first started working as a radio jockey, little did she know that in a short span of time she would become one of Kashmir’s most recognized radio voices and be popularly identified as Rj Rafia.

She had a brief stint on Doordarshan as a host of their morning show. She followed this up by enrolling in a journalism program to further pursue her career in mass media and work on her skills as a presenter and speaker.

Her journey continued after she started working at a local newspaper as a paid intern. Rafia then had a successful run with The Logical Indian media house in Banglore. All this experience prepared her well for what was to come next in her career.

When Radio Mirchi launched in Kashmir and were looking for new voices from the valley Rafia had no hesitation in auditioning which turned out to be a success and proved to be a defining moment for her. She was already on the path that would lead to her becoming one of valley’s beloved radio jockeys.

A resident of Charari Sharief town, this made her the first female jockey from Budgam. The listeners took a liking to her gregarious voice and personality and she quickly became a favourite on air. Her charm and way of presenting the information to listeners made her regular on Radio Mirchi FM.

From making people laugh, entertaining them and raising awareness about social issues in the society Rafia keeps her listeners intrigued while informing them about latest happenings around the valley. She also raises her voice on various matters of public interest and at times helps make a difference in the lives of people.

She continues to make an impact in the society and inspire others with her work at Mirchi world and we at Taarukk hope that her voice continues to delight us for years to come.