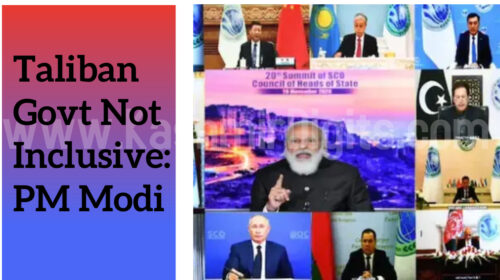 Addressing Shanghai Cooperation Organisation (SCO) summit on Friday, Prime Minister Narendra Modi finally removed some ambiguity from Indian side on the Taliban regime in Afghanistan saying that it is not inclusive, adding that the change in power happened without negotiation.

PM Modi also stressed that the world leaders should not rush into recognising it.

Talking about the recent developments in Afghanistan, Prime Minister Narendra Modi on Friday spoke about the challenges related to peace and security in the region.

“Developments in Afghanistan could lead to an uncontrolled flow of drugs, illegal weapons and human trafficking,” PM Narendra Modi said.

PM Modi also said that the biggest challenges for Asian countries are related to the increasing radicalisation and the Afghanistan situation has made that visible.

“That’s why it is essential that the global community take a decision on the recognition of the new system, collectively and with proper deliberation. On this matter, India supports the central role of the United Nations,” PM Narendra Modi said at SCO-CSTO Outreach Summit on Afghanistan.

On impact of developments in Afghanistan on the neighbouring countries, Prime Minister Narendra Modi said, “There is need for regional focus and cooperation on this issue.”

PM Modi in his virtual address at the SCO summit, which is celebrating its 20th anniversary, said, “20th anniversary of SCO is the right time to think about the future of SCO. The biggest challenges in this area are related to peace, security and trust deficit. The root cause of these problems is increasing radicalisation and the recent developments in Afghanistan have made this challenge clear.”