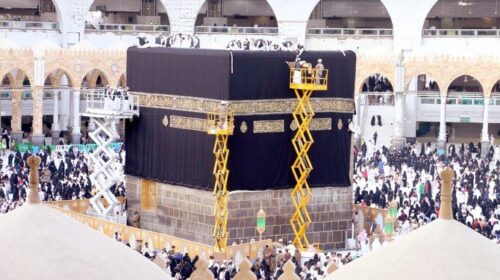 As Kaabah gets draped in new Kiswah (cloth) in the annual ceremony held on Sunday, we go through history and read about the man who clothed Kaabah first.

Kiswa refers to the embroidered piece of cloth that is used for covering the Kaabah, the centre of Masjid-al-Haram in Makkah. Every year the old Kiswa cloth is replaced with a new one on the ninth day of the month of Du al-Hijjah (the month of Hajj).

This tradition is considered very significant in Islam and is quite sacred among Muslims. The very first person to cloth the Kaaba was the King of Yemen, Tubba Abu Karab Asad, in the pre Islamic period.

There are various accounts about how Tubba Abu Karab Asad, came to Makkah and started this tradition, but the most authentic narration includes his conversion to Judaism. Karab took a military expedition to eliminate influence of Byzantium in his northern provinces. When they reached Madinah meeting no resistance, they passed through the town. One of his sons was left behind as governor of the town. A few days later the people of Madinah killed their new governor. As the news reached the King, enraged he approached Madinah to avenge his son’s death.

When the king arrived with his troops, two Jewish Rabbis talked to Karab Asad and explained to him that this town is under Allah’s protection and he will be destroyed if he attacks the town. Karab Asad agreed to leaving the town alone and was influenced by Judaism. The King then converted to Judaism and his army followed likewise.

Continuing his expedition, he marched towards Makkah, but the two Rabbis warned him that this town is too under Allah’s protection and should not be attacked. Instead they told the King to go inside the town and do Tawaaf around Kabbah. Karab Asad agreed and went inside. There after doing Tawaf, he decided to cloth the Kaabah. His successors also treated covering Kaabah to be a religious duty and hence began the pious tradition that continues to this day.