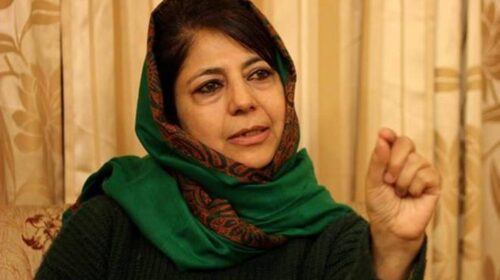 The former J&K Chief Minister Mehbooba Mufti has said that the government has gone all out to disempower Kashmiris.

In an exclusive interview with columnist David Devadas, the PDP chief said Kashmiris feel suffocated, but she also spoke of the inevitability of reconciliation by the Centre.

“Dum ghut gaya hai (one can’t breathe),” says former Chief Minister Mehbooba Mufti, in what she describes as “an open-air prison”. Acknowledging that there has been repression in the past, too, she says, “I haven’t seen it so bad” that “people are scared even within the four walls of their house”.

To emphasise her point, Mehbooba says that boys who came for a protest she led were asked to sign a bond that they would not protest again.

When she didn’t go to meet the Delimitation Commission, her mother got a notice from the Enforcement Directorate. And when she organised a public meeting of the Peoples Democratic Party, of which she is the president, her mother was summoned by the ED.

Holding that one “can’t hold people under the gun for a long time”, she speaks of a lot of resultant anger: “People feel humiliated and hurt” for “they [the government] have gone all out to disempower us”.

She points out double standards, too, saying she got a COVID-19 protocol notice for having more than 25 persons at a meeting, while the Lieutenant-Governor, and the relatively new Apni Party, have had huge programmes, and a BJP leader booked the entire sprawling Dak Bungalow grounds in Khanabal for a function at his son’s wedding.

She suggests that the Centre should “take some measures” for confidence-building. The release of political prisoners could be one. She seems particularly concerned about the arrest of her party’s youth president, Waheed-ur-Rehman Para.

Not only does she have no time for secessionism, but Mehbooba also links issues in Kashmir with those in other parts of the country. Referring to “how ruthlessly they beat farmers”, she holds that Kashmir has become an “experimental ground”, and what was done there would be repeated elsewhere.

No Scope for Democracy

Talking of prospective elections as an ongoing process from the “illegal scrapping of (Articles) 370 and 35-A”, she says it was done for certain things such as changed domicile laws. She claims that officials have been threatened with sacking if they don’t process domicile claims fast.

She predicts that there would be a good turnout to vote — “unless the Centre does not want” it, in order to “favour their proxies”, adding that she does not want to name those proxies.