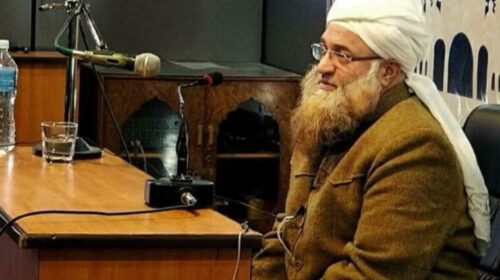 Scholars have a huge impact on our society and as such they play a crucial part in shaping the way our society thinks and develops. Shiekh Ul Hadith Mufti Nazir Ahmad Qasmi is one such renowned scholar from Kashmir.

Shiekh Ul Hadith is a title that commands much respect in the Islamic fold in the valley and beyond. Mufti Nazir is the Head Mufti in the Raheemiyyah seminary, Bandipora. He was also a founding member of All India Muslim Personal Law Board and also serves as general secretary of Majlis e Fiqh, Jammu and Kashmir.

He began his spiritual journey at Deoband, where he read and memorized Quran and studied various other religious texts. After a while he graduated from Darul Uloom Deoband in the dars e Nizami course and followed it up by studying Ifta for a year.

Mufti Nazir is a beacon of knowledge when it comes to understanding of Islamic laws and issues. His sermons speak to people on a personal and spiritual level and address their issues.

His sermons and lectures have helped with a better understanding of Islam and matters related to Fiqh in the valley. He has also helped people understand modern day issues through an Islamic point of view, by means of his ever growing YouTube channel.

Mufti Nazir has made it possible for many of the young people to try and understand Islam through his soft spoken and inviting approach as he believes that is the first step in guiding youth towards the truth.

The valley is indeed blessed to have such a great elder among itself. His speeches and sermons will continue to teach and inspire people to become better and Taarukk wishes that Mufti Nazir continues to impart us with his wisdom.